In R, factors are used to work with categorical variables, variables that have a fixed and known set of possible values. They are also useful when you want to display character vectors in a non-alphabetical order.

Historically, factors were much easier to work with than characters. As a result, many of the functions in base R automatically convert characters to factors. This means that factors often crop up in places where they’re not actually helpful. Fortunately, you don’t need to worry about that in the tidyverse, and can focus on situations where factors are genuinely useful.

To work with factors, we’ll use the forcats package, which is part of the core tidyverse. It provides tools for dealing with categorical variables (and it’s an anagram of factors!) using a wide range of helpers for working with factors.

If you want to learn more about factors, I recommend reading Amelia McNamara and Nicholas Horton’s paper, Wrangling categorical data in R. This paper lays out some of the history discussed in stringsAsFactors: An unauthorized biography and stringsAsFactors = <sigh>, and compares the tidy approaches to categorical data outlined in this book with base R methods. An early version of the paper helped motivate and scope the forcats package; thanks Amelia & Nick!

Imagine that you have a variable that records month:

Using a string to record this variable has two problems:

You can fix both of these problems with a factor. To create a factor you must start by creating a list of the valid levels:

Now you can create a factor:

And any values not in the set will be silently converted to NA:

If you want a warning, you can use readr::parse_factor():

If you omit the levels, they’ll be taken from the data in alphabetical order:

Sometimes you’d prefer that the order of the levels match the order of the first appearance in the data. You can do that when creating the factor by setting levels to unique(x), or after the fact, with fct_inorder():

If you ever need to access the set of valid levels directly, you can do so with levels():

For the rest of this chapter, we’re going to focus on forcats::gss_cat. It’s a sample of data from the General Social Survey, which is a long-running US survey conducted by the independent research organization NORC at the University of Chicago. The survey has thousands of questions, so in gss_cat I’ve selected a handful that will illustrate some common challenges you’ll encounter when working with factors.

(Remember, since this dataset is provided by a package, you can get more information about the variables with ?gss_cat.)

When factors are stored in a tibble, you can’t see their levels so easily. One way to see them is with count():

Or with a bar chart:

By default, ggplot2 will drop levels that don’t have any values. You can force them to display with:

These levels represent valid values that simply did not occur in this dataset. In dplyr::count() set the .drop option to FALSE, to show these.

It’s often useful to change the order of the factor levels in a visualisation. For example, imagine you want to explore the average number of hours spent watching TV per day across religions: 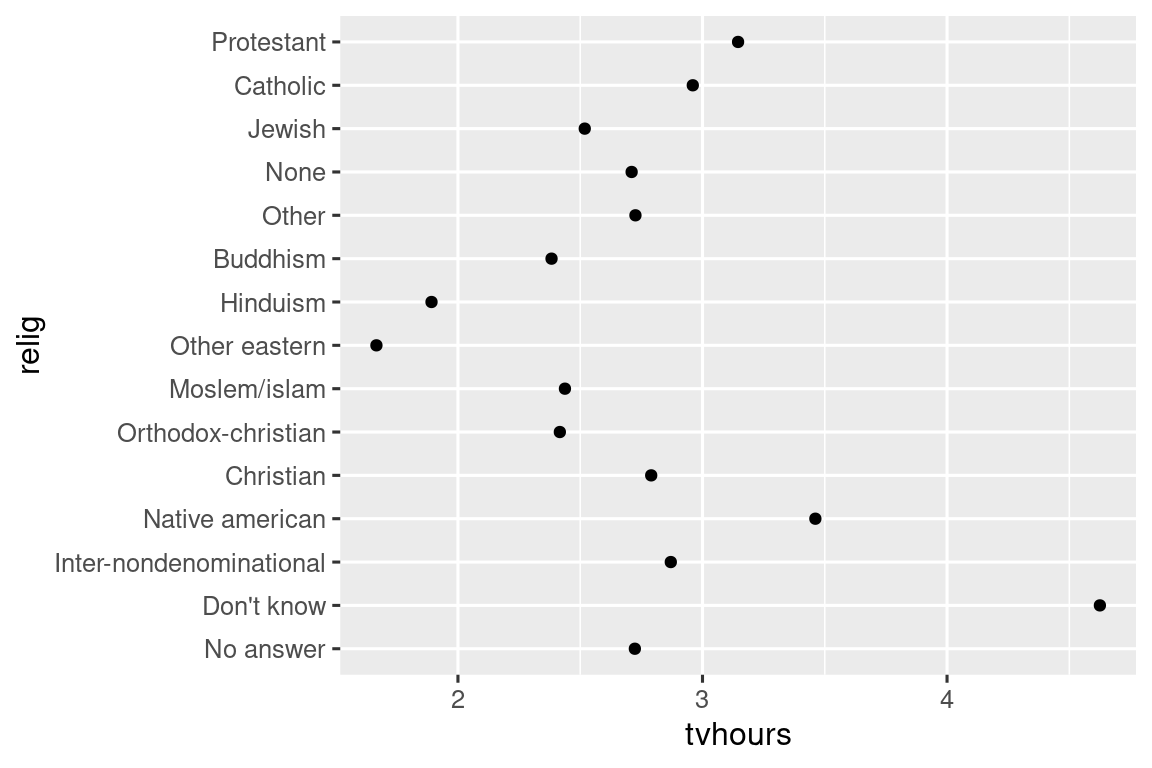 It is difficult to interpret this plot because there’s no overall pattern. We can improve it by reordering the levels of relig using fct_reorder(). fct_reorder() takes three arguments: 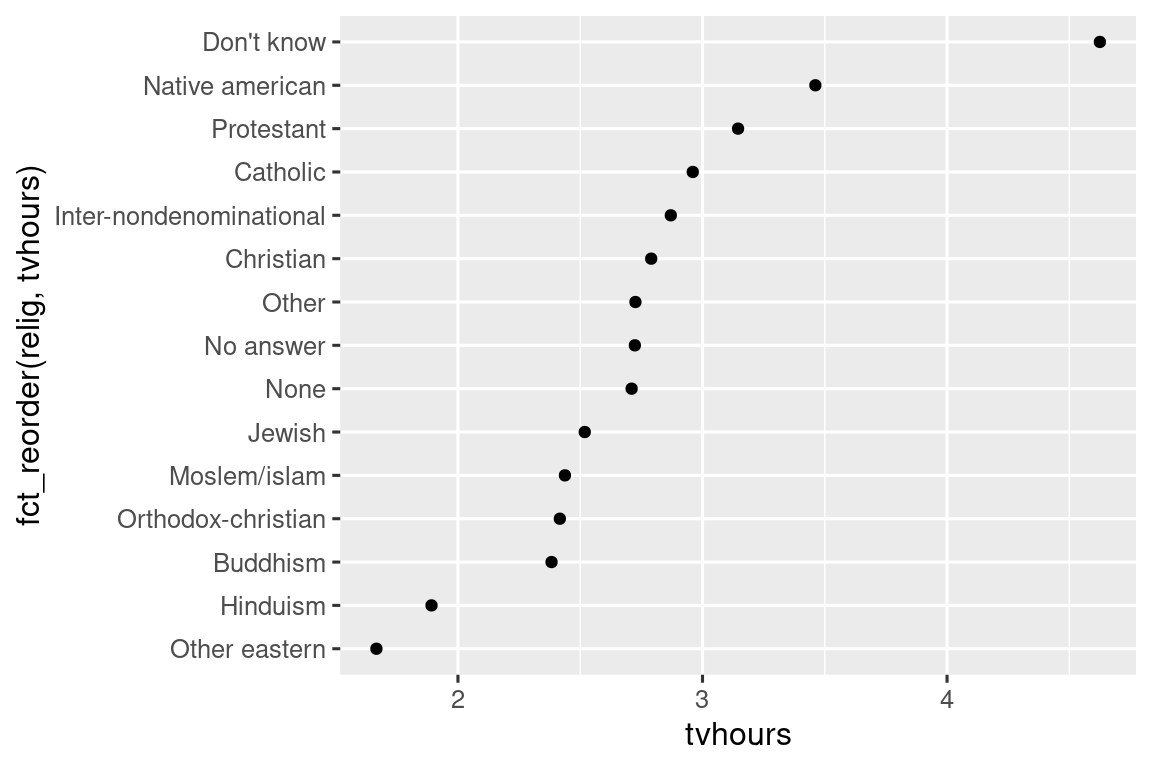 Reordering religion makes it much easier to see that people in the “Don’t know” category watch much more TV, and Hinduism & Other Eastern religions watch much less.

As you start making more complicated transformations, I’d recommend moving them out of aes() and into a separate mutate() step. For example, you could rewrite the plot above as:

What if we create a similar plot looking at how average age varies across reported income level? 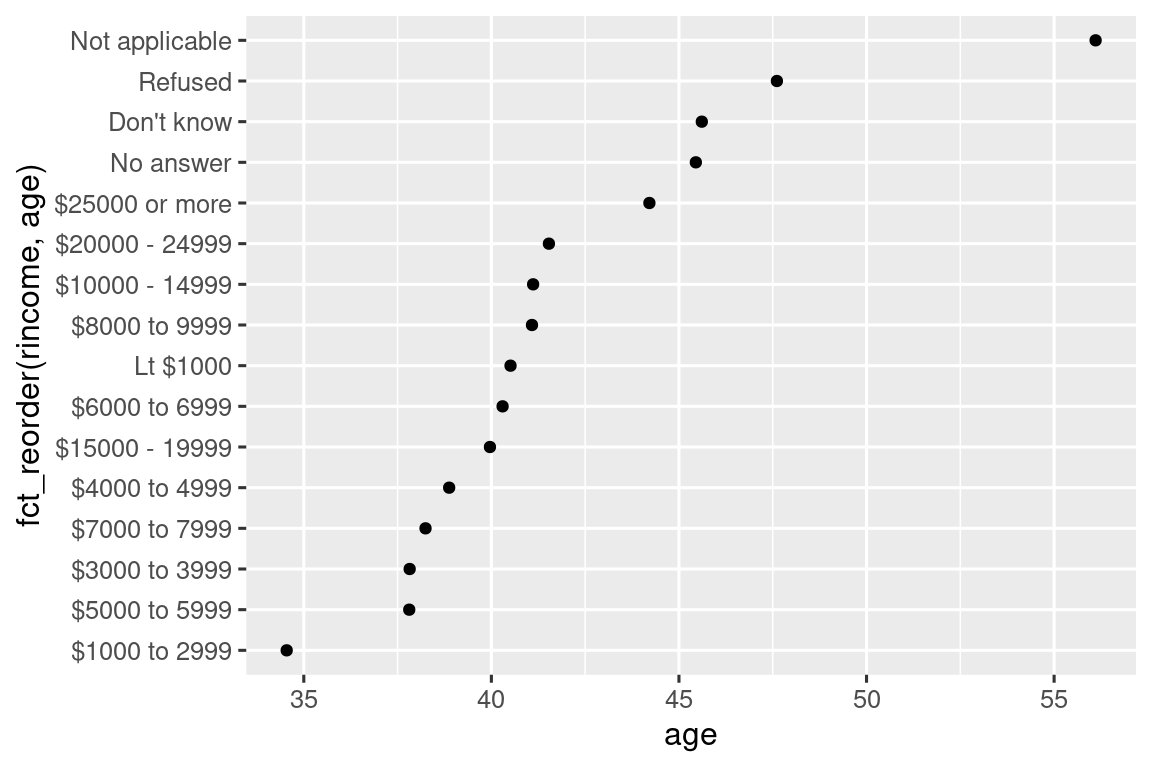 Here, arbitrarily reordering the levels isn’t a good idea! That’s because rincome already has a principled order that we shouldn’t mess with. Reserve fct_reorder() for factors whose levels are arbitrarily ordered.

However, it does make sense to pull “Not applicable” to the front with the other special levels. You can use fct_relevel(). It takes a factor, f, and then any number of levels that you want to move to the front of the line. 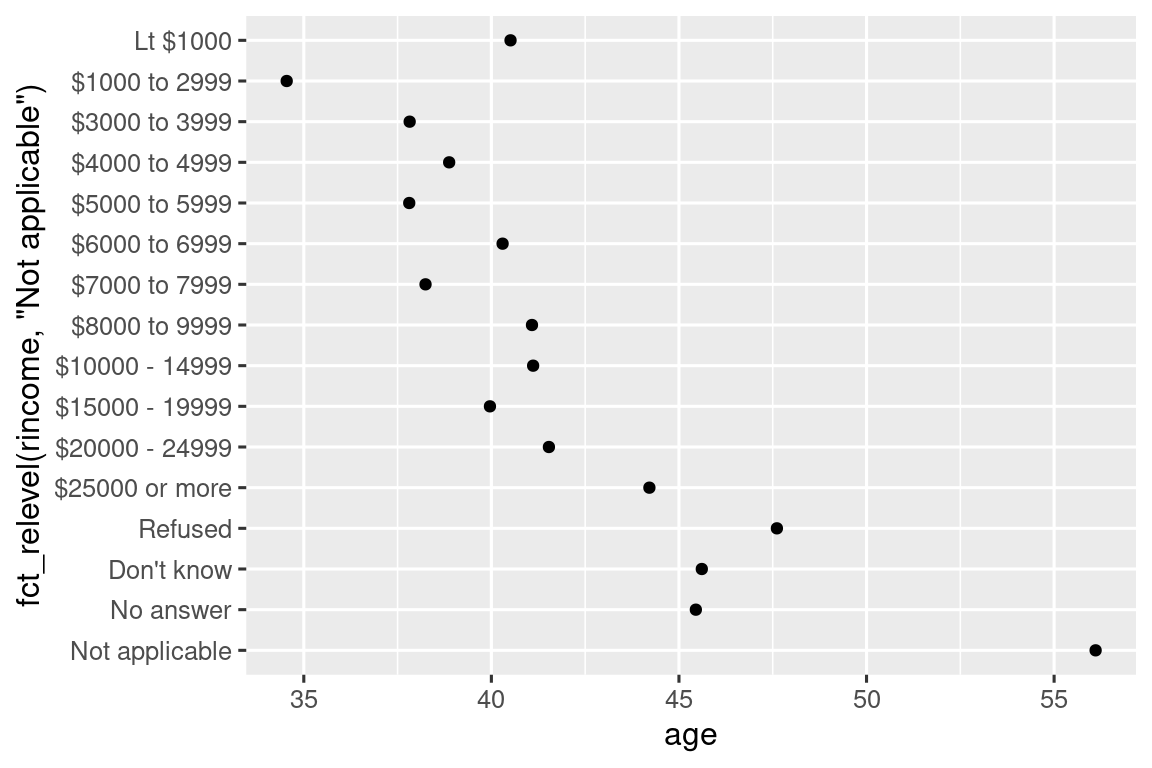 Why do you think the average age for “Not applicable” is so high?

Another type of reordering is useful when you are colouring the lines on a plot. fct_reorder2() reorders the factor by the y values associated with the largest x values. This makes the plot easier to read because the line colours line up with the legend. 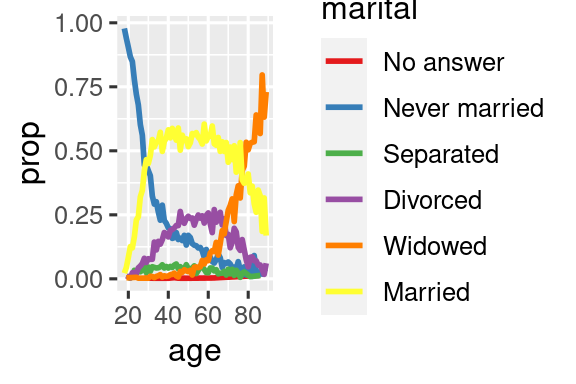 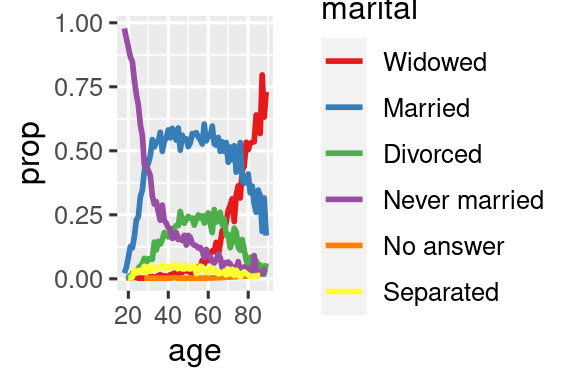 Finally, for bar plots, you can use fct_infreq() to order levels in increasing frequency: this is the simplest type of reordering because it doesn’t need any extra variables. You may want to combine with fct_rev(). 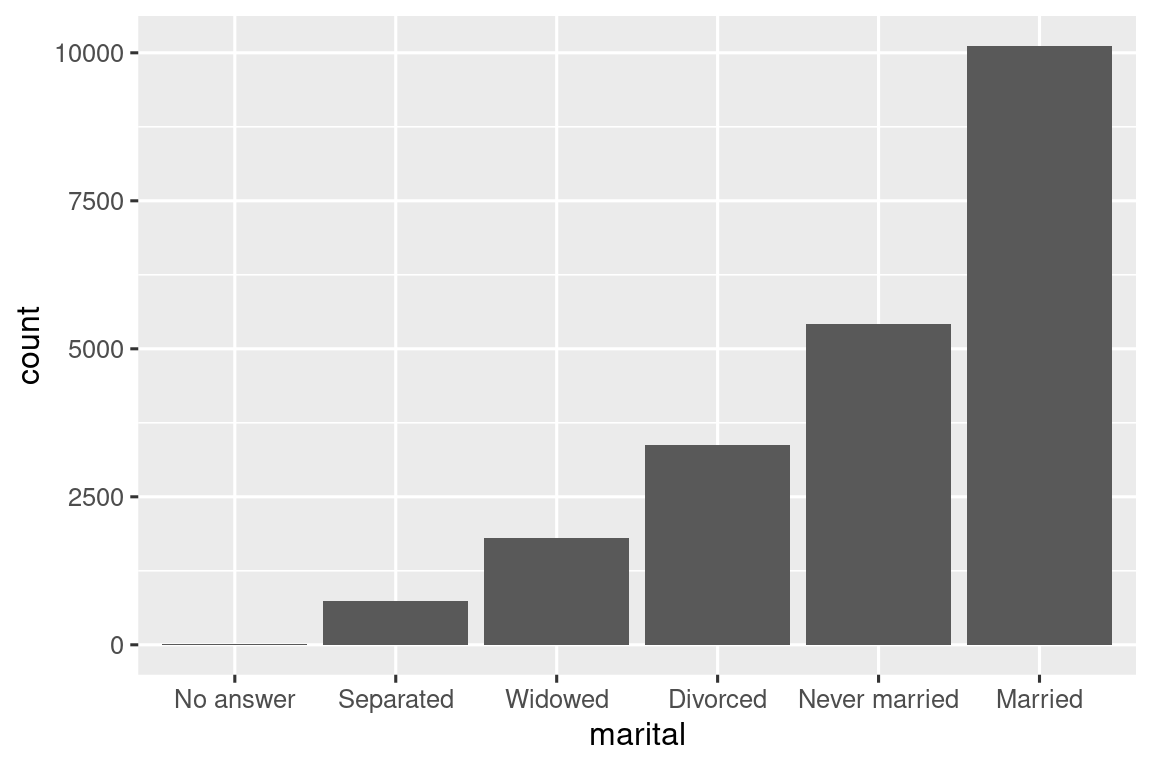 More powerful than changing the orders of the levels is changing their values. This allows you to clarify labels for publication, and collapse levels for high-level displays. The most general and powerful tool is fct_recode(). It allows you to recode, or change, the value of each level. For example, take the gss_cat$partyid:

The levels are terse and inconsistent. Let’s tweak them to be longer and use a parallel construction.

fct_recode() will leave levels that aren’t explicitly mentioned as is, and will warn you if you accidentally refer to a level that doesn’t exist.

To combine groups, you can assign multiple old levels to the same new level:

You must use this technique with care: if you group together categories that are truly different you will end up with misleading results.

If you want to collapse a lot of levels, fct_collapse() is a useful variant of fct_recode(). For each new variable, you can provide a vector of old levels:

Sometimes you just want to lump together all the small groups to make a plot or table simpler. That’s the job of the fct_lump_*() family of functions. fct_lump_lowfreq() is a simple starting point that progressively lumps the smallest groups categories into “Other”, always keeping “Other” as the smallest category.

In this case it’s not very helpful: it is true that the majority of Americans in this survey are Protestant, but we’d probably like to see some more details! Instead, we can use the fct_lump_n() to specify that we want exactly 10 groups: